Thanks for checking out our House of Refuge.  We hope you will get a better feel for what the House of Refuge is all about as you look through the site. Check out the “Gallery“ there are photos of events and church activities there.  If you have any questions please take a moment to send one of our staff a quick email and we would be happy to help you in  any way that we can. 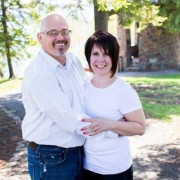 Dave Ballard and his wife Rebecca first came to House of Refuge in 1986 when they moved to Duluth as newlyweds.  They immediately stepped into a life of ministry together.  Over time they have led youth ministries, produced dramas, led worship, organized retreats and conferences, done counseling, and taught Sunday School.  In 1995 Dave received his ministry credentials with the Assemblies of God.  In 1999 Dave left his job as a photojournalist and stepped into full time ministry as the Lead Elder at then Living Stones.  God gave him a ministry vision of “connecting the needs of people with the power of God”.  Since that time he has worked to fulfill that vision and build physical and spiritual relationships to further the Kingdom of God. To better fit the Ballard’s ministry vision the church was renamed Duluth House of Refuge in 2015.

Working together, the Ballards have dedicated themselves to build a strong church community based on releasing the power of the Holy Spirit in its midst. They have hosted a nightly prayer gathering since February 7, 2018 seeing hundreds of people and dozens of churches gathering to rest in the presence of God, then pray His heart for that night. The Ballard’s believe God wants to change lives and the world using His church released in the power of the Spirit and the gifts of the Spirit.  Dave has also used his teaching gift and has traveled to other countries to teach at mission bases.  The Ballards have 7 children, and 7 grandchildren.